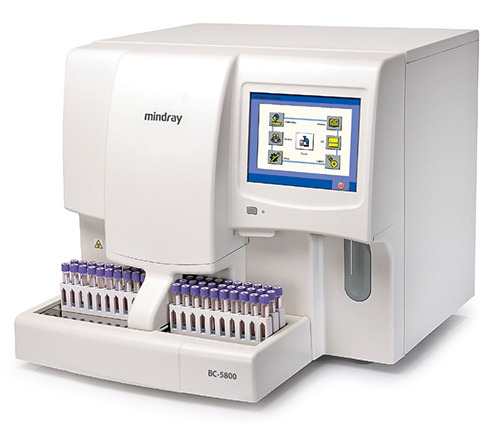 Blood is one of the most important diagnostic entities in our body. Minor infections to diseases like cancers can be diagnosed through proper analysis of blood. One of the most common tests prescribed by doctors is the blood test which includes a complete blood count (CBC). Although, counting something as minute as cells needs accuracy and rapidity. Both of these requirements were fulfilled with the invention of a hematology analyzer, which has been modified a lot over the last few decades. They now include features like data fusion and are integral for cellular and morphological analysis in a hematology laboratory. Let’s look into the details to understand the working principle and other important aspects of the hematology analyzer.

What is a Hematology Analyzer?

A hematology analyzer is a medical device that identifies and determines the quantity of each type of cell in a blood sample. The results are then compared to the standard set values and any change from that standard value range indicates an abnormality. It is widely used in the detection of a lot of diseases. This is due to the fact that blood moves throughout the body carrying oxygen and taking away the waste to remove. So, it is practically impossible for any change in the body to not be reflected in the blood. They are used for various procedures in the medical field like white blood cell count, complete blood count, reticulocyte analysis, and coagulation tests, and can be used for both animal and human blood.

At the beginning of the 20th century, various blood tests like complete blood count were performed manually. The blood from each sample was diluted, and manual counting of cells using a mathematical formula was done, which took around 30- 40 minutes. The cyanmethemoglobin method was used along with a spectrophotometer, and the indices were calculated. All the procedures from smear making to staining were performed individually with duplicate testing sets to compare the results. The whole procedure would take over two hours. 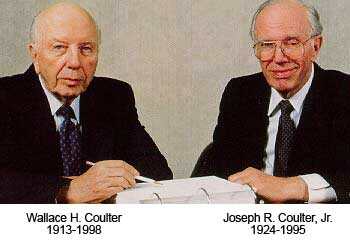 In the year 1953, Wallace Coulter introduced the famous Coulter principle for counting cells and other components of the blood using impedance measurement. Later, the application of Coulter’s Principle was found to be helpful in the drug industries, food, and beer making, etc. The most important and widely used application still is attributed to the medical industry for revolutionizing the field of hematology. His procedure involved suspending the red blood cells in a solution with an electrical current flowing and making it pass through an aperture. Then the number of cells was measured as per the number of pulses of the current flowing. In 1956, the first Model A Coulter Counter was sold that counted a red blood cell sample in 10 minutes. This was seen as a huge milestone compared to the earlier manual methods. 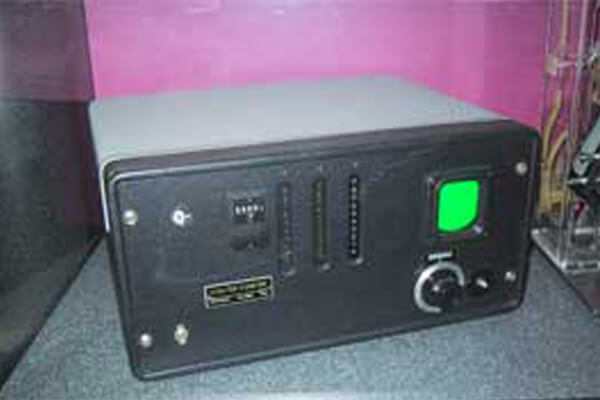 An improved version called ‘Model B Coulter Counter’ was developed during the 1960s, but they were only useful in counting leukocytes and erythrocytes. Other modified versions followed with different variations and it was not long before all the hospitals in the United States had a Coulter Counter. The most commonly used model was Model F. 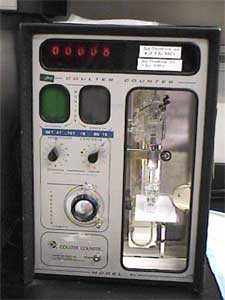 It was in 1968 when the first fully automated hematology analyzer was launched in the markets, called the Model S. It widened the applications to perform CBC, Hematocrit, Mean Corpuscular Volume (MCV), Mean Corpuscular Hemoglobin (MCH), and Mean Corpuscular Hemoglobin Concentration (MCHC). It also reduced the sample analysis time, down to 2 minutes. With further advancements, new manufacturers came into the market and Coulter’s patent expired. Automated differential hematology analyzers and automated reticulocyte analyzers first appeared in the 1980s. It wasn’t until the late 1990s that digital cell images and automated manual differentials were introduced.

Today, modern and automated hematology analyzers are used to sample blood, quantify and classify the cells along with describing cell populations. They use the combined principle of optical light scattering and electrical impedance that was used by Coulter. The latest descendant of the Model A Coulter Counter, the LH 750, can determine 26 reportable hematological parameters. The Sysmex XN-9100 with four XN analyzers reports 30 parameters and has a throughput of up to 400 CBCs and 75 smears per hour.

Parts of the Hematology Analyzer

The parts of the hematology analyzer vary according to the model and the manufacturer but the most basic components are as follows: 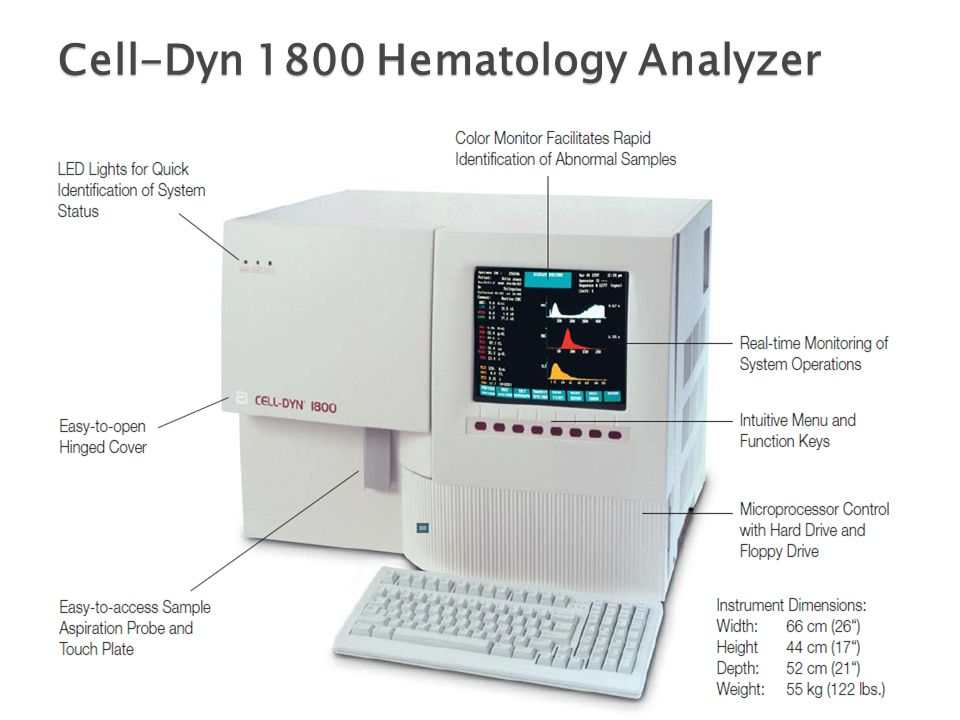 There are 2 main principles that are used by manufacturers today: Electrical Impedance and Flow Cytometry or Flourescent Flow Cytometry.

Electrical impedance: Over 98% of the hematology analyzers use this principle which is also known as ‘Coulter’s Principle’. The blood to be sampled is passed between two electrodes through a passage aperture that is so narrow, that only one cell can pass through it at a given time. 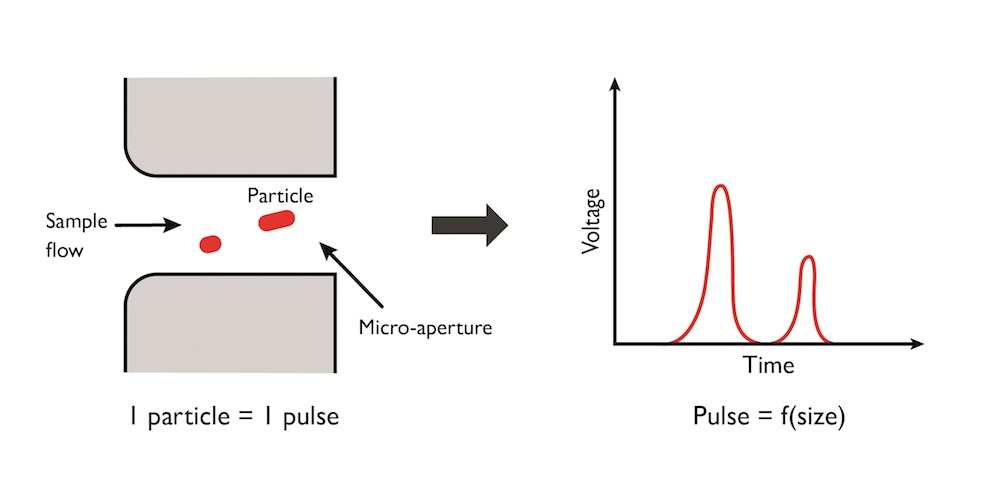 The impedance is directly proportional to the cell volume. As a particle passes through the aperture passage, the volume of the particle displaced is sensed and it causes a short-term change in the impedance. This small change is known as a voltage pulse which is directly proportional to the size and volume of the displaced particle. Using a count- and pulse-height analyzer, the number and volume of each particle passing through the aperture can be determined. 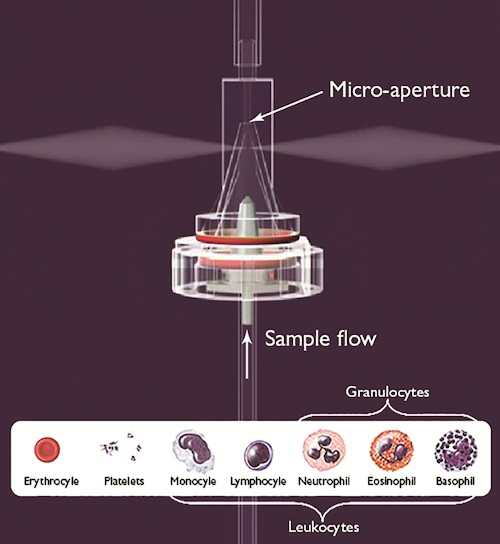 Fluorescent Flow Cytometry: A single stream of cells is made to pass through a laser beam. The absorbance and scattering of light are measured at different angles to know the cell’s granularity, diameter, and complexity. Light will scatter more readily at more varying angles in cells with higher complexity, or granularity. Consequently, cells with more complexity will emit more side scatter, while simpler cells will emit more forward scatter. It is comparatively costlier due to the need for fluorescent reagents but provides better and a wider range of results that are not seen through just electrical impedance. 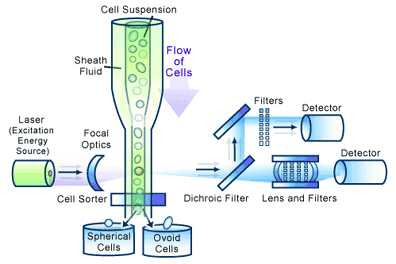 How to operate a Hematology Analyzer 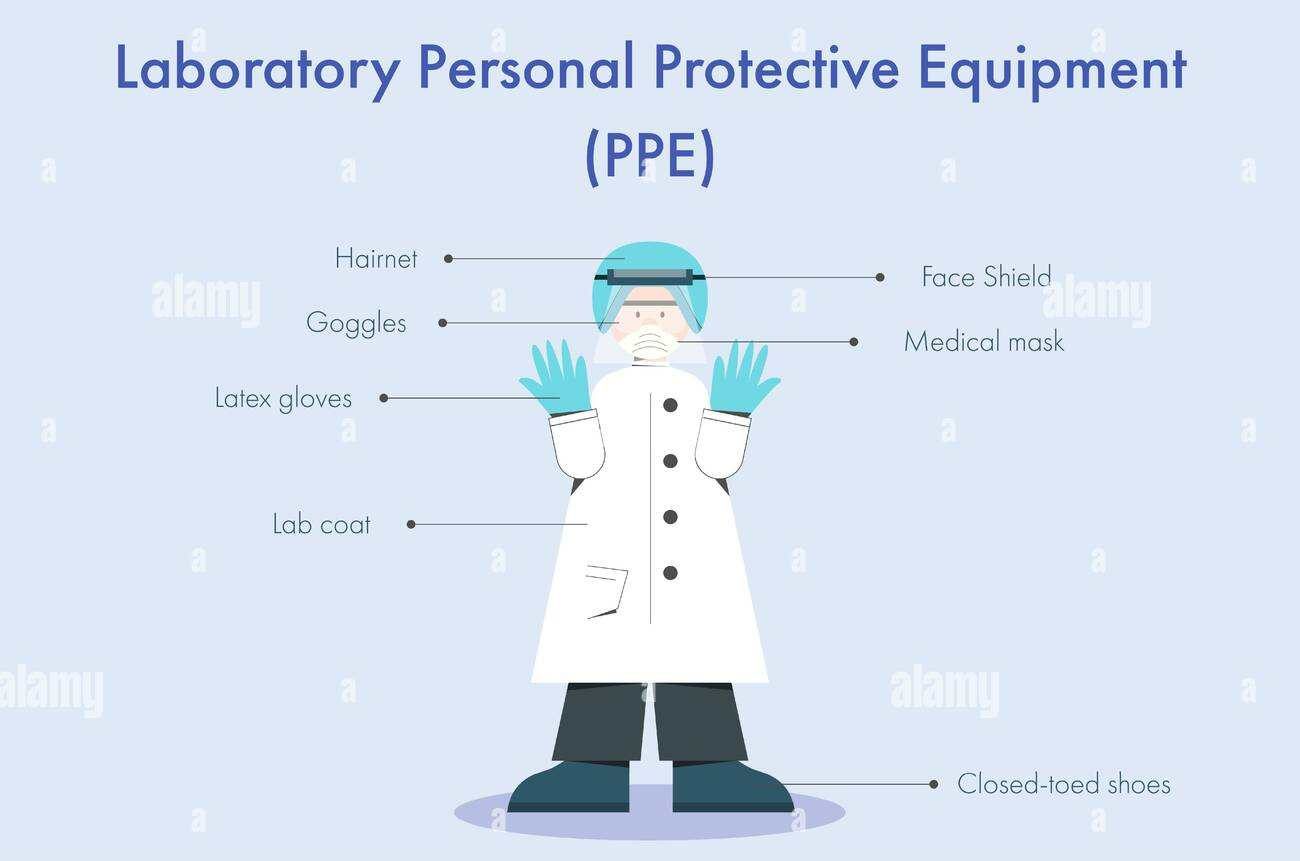 There are 2 main types of hematology analyzers- 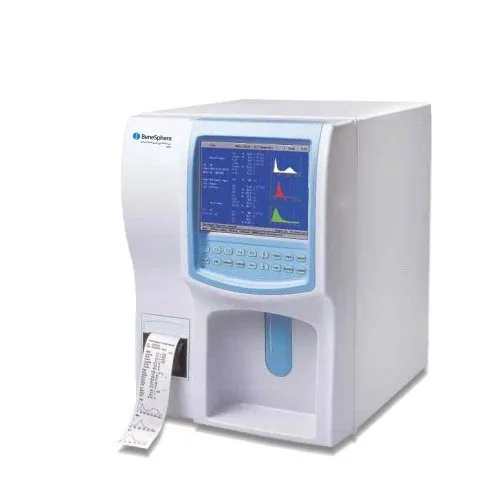 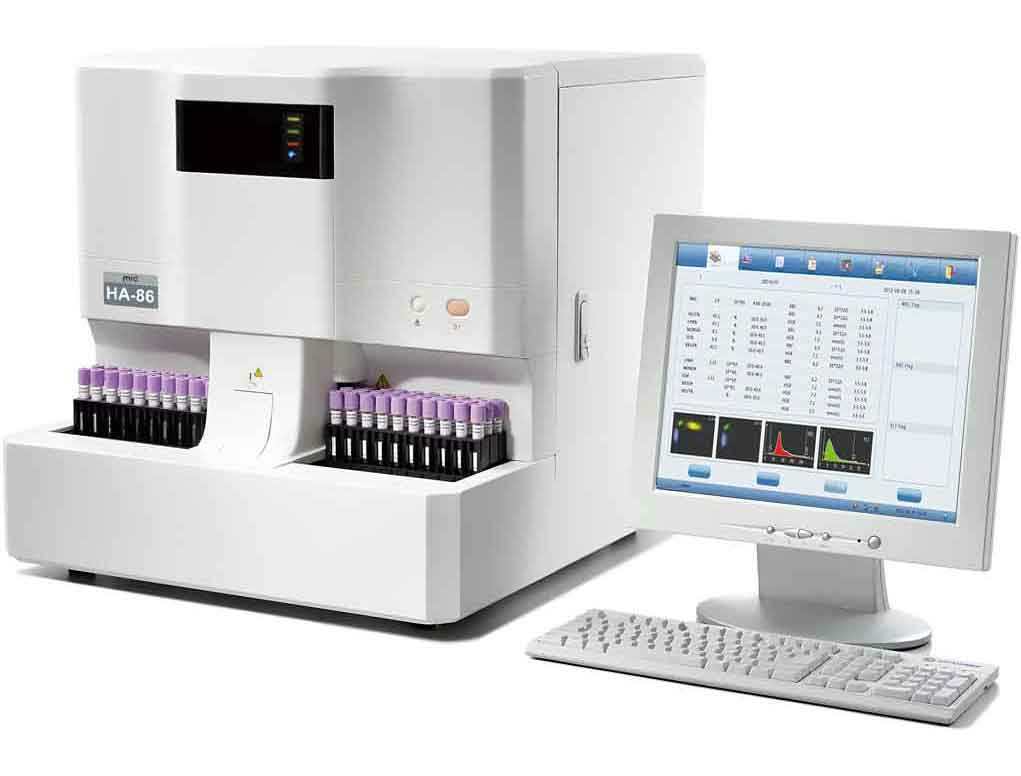 They are also classified as-

Advantages of a Hematology Analyzer

Limitations of the Hematology Analyzer 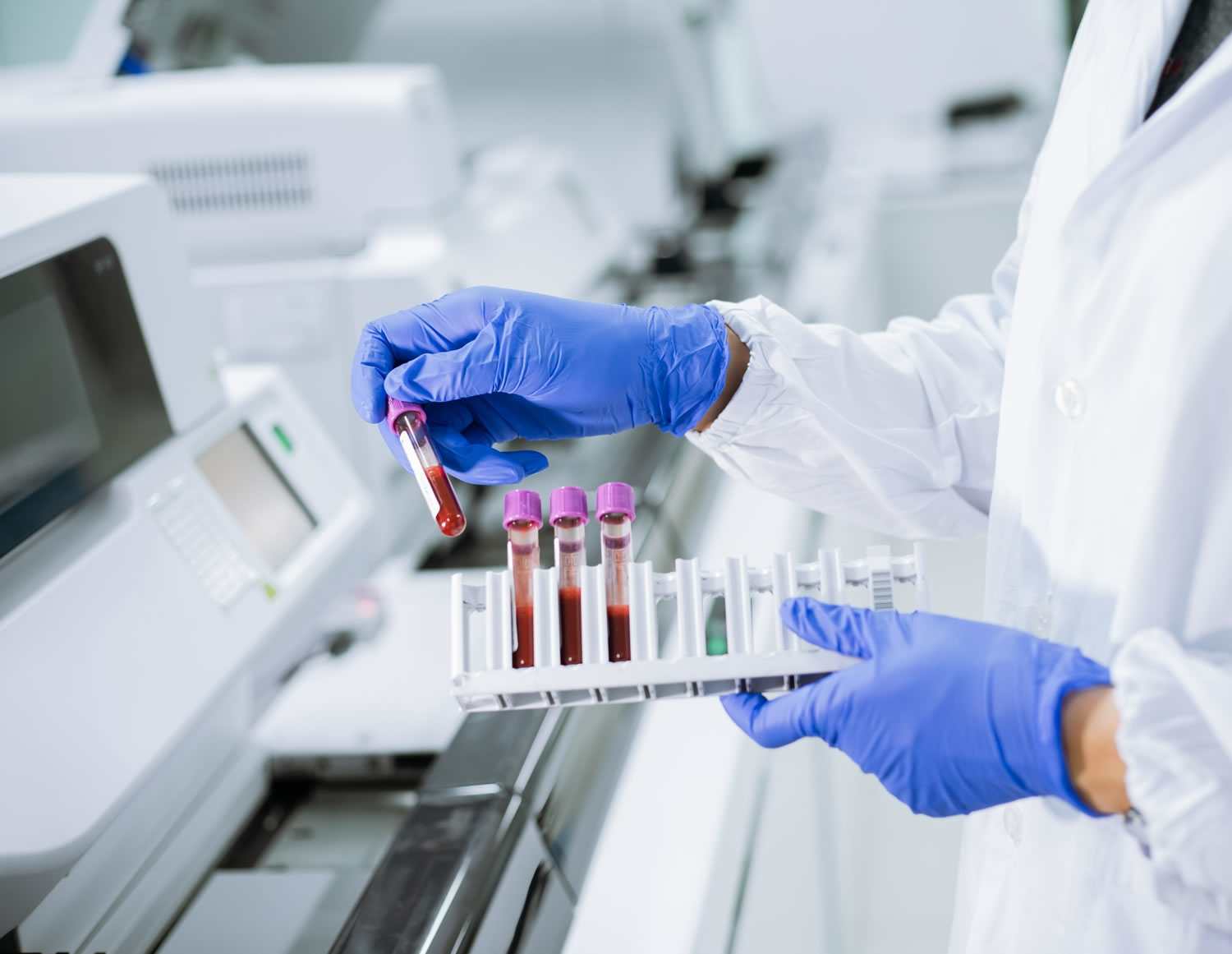 Hematology analyzers are most commonly used for performing tests like CBC, which is prescribed by most doctors to get a clear picture of the state of the body. Some symptoms that do not relate to any physical sign on the body are confirmed only after a blood test. Some other analyses that can be performed are-

The use of the hematology analyzer requires regular calibration and control checks for it to continue delivering accurate results. Any delays in the changing of reagents or failure of calibration lead to disparities in the values and hence, they should be maintained carefully. 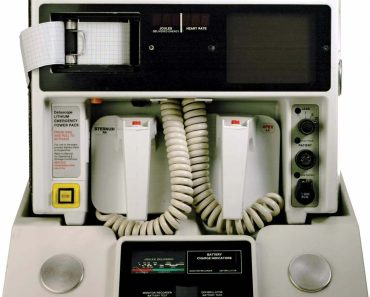 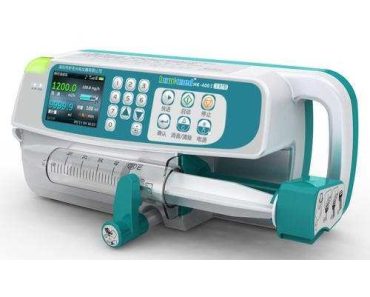 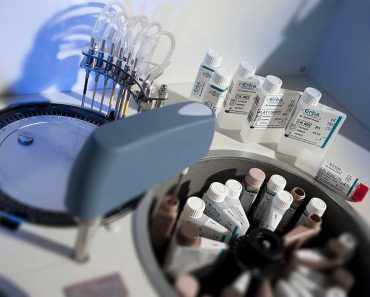 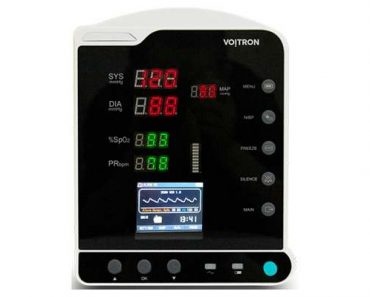 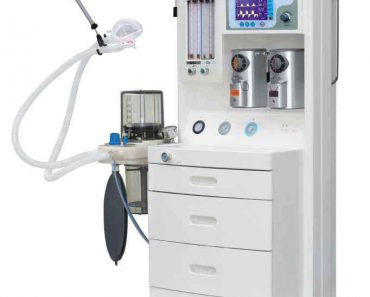 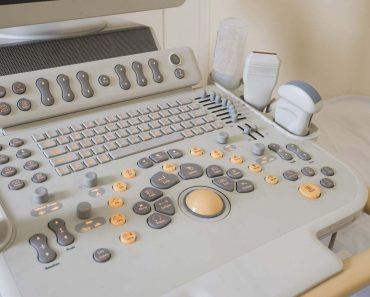